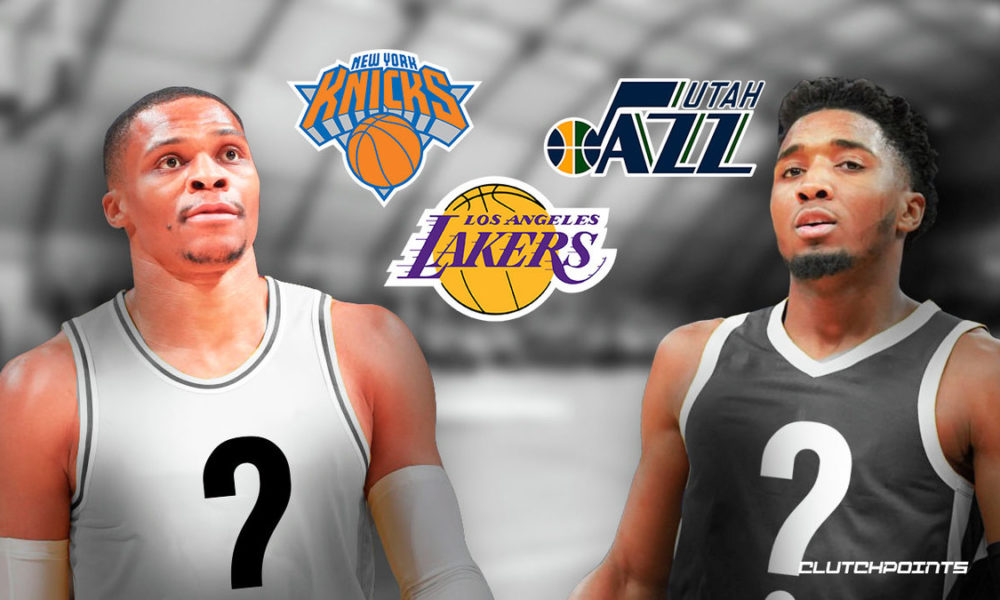 According to league insiders, the Lakers have engaged with the Jazz and Knicks over a potential three-team deal that would send Russell Westbrook to Utah and send Donovan Mitchell to New York. In order to manage salary issues, the Knicks would have to send players (maybe Derrick Rose and Obi Toppin) to both clubs while the Jazz would send at least two players (likely a mix of Bojan Bogdanovic, Patrick Beverley, Jordan Clarkson, and Malik Beasley) to the Lakers. If this deal does push through, the Jazz would reportedly buy out Westbrook. Their main priority would be receiving a sizable amount of draft assets from both the Lakers and Knicks. Reports also claim that the Lakers had already shown interest in the Knicks’ Cam Reddish before. As for New York, the Knicks have previously shown interest in Beasley. It would certainly be interesting to keep tabs on whether the Lakers could indeed get Reddish or the Knicks could indeed acquire Beasley if the three clubs were able to reach an agreement. As of now, however, the three teams have not yet finalized any deal. Naturally, the Jazz want a substantial haul for Mitchell. Previous rumors have said that they requested three players and six draft selections from the Knicks in the previous month. Meanwhile, other teams who want Westbrook have talked to the Lakers about their 2027 and 2029 first-round picks. As of now, though, several accounts claim that the Lakers just are not willing to part with more than one first round pick in any potential deal for the former MVP. Right now, the main sticking point is the collective price tag of both Westbrook and Mitchell. The Lakers, Jazz, and Knicks need to resolve that before coming to any sort of agreement. The Lakers, Knicks & Jazz reportedly had conversations on a potential 3-team trade: Jazz:Russell Westbrook (Bought out)Draft picks from NY & LA Knicks:Donovan Mitchell Lakers:Patrick BeverleyJordan ClarksonBojan Bogdanovic OR Malik Beasley (via @MikeAScotto) pic.twitter.com/DyKTQWW61X — ClutchPoints (@ClutchPointsApp) August 5, 2022 Still, for most league pundits and insiders, any three-team trade including Russell Westbrook would really have to include the Lakers’ 2027 and 2029 first-round picks. Right now, one hypothetical three-team transaction can look like this: Knicks will receive Donovan Mitchell. Lakers will receive Patrick Beverley, Bojan Bogdanovic, Jordan Clarkson, Cam Reddish, and Obi Toppin. Jazz will receive Russell Westbrook (to be bought out), Derrick Rose, 2027 & 2029 first round picks from the Lakers, and 2023 & 2025 first round picks from the Knicks. The salaries would check out in this scenario. They cannot include Beasley, though, because of restrictions on “recently traded” players. They can trade him without any restriction only after August 30, 2022. If any deal similar to this would indeed push through, the Knicks would get a great addition to their backcourt. That already features RJ Barrett and Jalen Brunson. The Lakers would unload Westbrook while having some interesting role players to round out their roster centered. LeBron James and Anthony Davis would still be their main guys, of course. The Jazz would also get even more draft assets. They are expected to make a play for projected 2023 top pick Victor Wembanyama. The post Lakers-Knicks-Jazz recently engaged in 3-way trade talks involving Russell Westbrook, Donovan Mitchell appeared first on ClutchPoints.